88,000 foreign patients came to Bengaluru over past two years

Signs and Symptoms of Testicular Cancer

The Challenge of Childhood Cancer and Bone Marrow Transplant in India

Key signs and symptoms of cancer

What Are the Risk Factors for Testicular Cancer?

Training viruses to be cancer killers

What is Testicular Cancer? 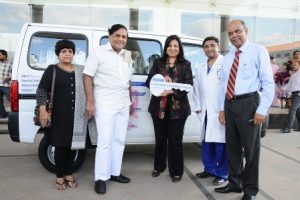 Narayana Health today announced the launch of the rural ‘Cancer Surveillance Program’ in partnership with Mazumdar Shaw Medical Foundation. The program launched by Dr. Devi Shetty, Chairman, Narayana Health and Dr. Kiran Mazumdar Shaw, Chairman and Managing Director, Biocon, will work towards creating awareness and conducting preliminary screening of Head and Neck cancers in several rural pockets of Karnataka. The foundation of the program is based on the statistics that highlights the huge urban-rural healthcare divide that exists in our country. The first phase of the program will be initiated across three villages of Atebele, Anekal and Gigini in Karnataka, which will be led by the Department of Head and Neck Oncology at Mazumdar Shaw Cancer Center at NH Health City. The focus will be to educate the community at large about the early signs and symptoms of mouth and throat cancer as its prevalence in rural India is increasing owing to the habit of chewing tobacco. A dedicated van donated by Dr. N Ravindranthan to support this program was flagged off today at NH Health City. Commenting about the launch of the Rural Cancer Surveillance Program, Dr. Devi Shetty, Chairman, Narayana Health, said, “Over 70% of India’s population lives in rural India but have access to only one-third of the hospital beds. Also, diagnosing and treating Head and Neck cancer requires specialist doctors. Since, 80% of the specialist doctors live in urban parts of the country catering to about 20% of the population, early diagnosis of this disease in rural India is difficult. Thus, leading to a worrisome situation that close to 75% of cancers are diagnosed only in its stage IV resulting in poor rate of treatment and survival. This initiative is a step towards reaching out to the population living in villages to ensure that everyone has access to timely diagnosis and quality healthcare.” Narayana Health’s Rural Cancer Surveillance program will strive to remove these barriers by reaching out to the rural community, educating the people about the early warning signs of cancers, screening for common cancers and undertaking preventive measures. Over 57.5% of Global Head and Neck cancers occur in Asia, especially in India. Out of all forms of cancer, Head and Neck cancers account for 30% in India. Thus, laying highest priority on this form of cancer could control the disease burden. Dr. Moni Kuriakose, Head of Department – Head & Neck, Oncology, Mazumdar Shaw Cancer Centre, said, “Awareness levels among people residing in urban India is higher than in rural parts and thus detection of the diseases is early unlike in rural India. However, this program aims to bridge this gap and we aim to roll this out by our team of doctors who will be going to rural areas. This will facilitate early diagnosis and better treatment outcomes among patients in rural India.” Head and Neck cancer in India differs vastly from Western countries as it depends on factors such as food habits, family and personal history, risk factors, etc. The world’s highest incidence of cancers is found in districts of north-east, central and southern India. A belt of thyroid cancer has also been identified in women in coastal districts of Goa, Karnataka and Kerala.