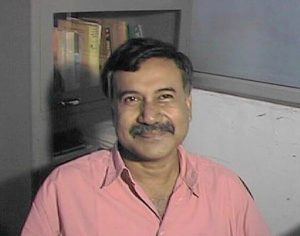 Dr. Dhirendra Bahadur is at present an institute Chair Professor at the Department of Metallurgical Engineering and Materials Science at IIT, Bombay, India. He served at various capacities at IIT, Kanpur and IIT, Bombay between 1978 and now. He was a visiting fellow of the Royal Society London- INSA exchange program and worked at Cavendish Laboratory from 1985-86. He was also visiting scientist at, Dalhousie University, Halifax, NS, Canada between 1987 and 1988 and a guest scientist at Forshungzentrum Juelich, Germany several times between 1995 and 2002. During the period of 2006-2007 he was at, ICMCB, Bordeaux, France and served as Associate Director, Research. Professor Bahadur’s present research interests are in the area of nanostructured oxide materials, their hybrids, grapheme and its composites, magnetic materials at a nano scale and their applications particularly in cancer theranostics, drug stabilization and targeted delivery, water purification, photocatalysis and sensing.

Professor Bahadur has organized several international conferences. Some of these are “International Symposium on Recent Advances in Inorganic Materials” in 2002 and “Indo-Singapore Symposium on Advanced Functional Materials” in 2006. He organized an International Conference on Nano Science and Nano Technology (ICONSAT 2010) in Feb, 2010. The selected papers presented during this conference have been published in International Journal of Nanoscience, 2011, for which Prof. Bahadur is an editor. Professor Bahadur was a theme editor of a special issue on Hybrid Nanostructures for diagnostics and therapeutics of Advanced Drug Delivery Reviews published by Elsevier in Nov, 2011.