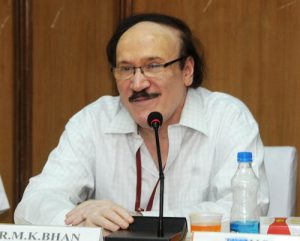 Dr. Bhan has played a leadership role in promoting primary healthcare for children in rural India during the last two decades. His main endeavor has been to bring the fruitfulness of science and technology to national programs for children. He has provided advocacy and leadership to many programs in India including promotion of oral rehydration therapy, micronutrient supplementation, introduction of new vaccines and greater coverage with existing ones. The IMNCI integrated program developed under his Chairmanship is being introduced in the reproductive child health program of the Government of India. This strategy will play a key role in reducing infant mortality in India. Dr. Bhan has provided leadership to the National Diarrheal Disease Control program which has resulted in reducing diarrheal death from nearly 1.2 million per year to 600,000 per year. He has trained thousands of primary health worker and doctors in oral rehydration. Dr. Bhan created an operational strategy for micro nutrient supplementation in India. He has been a cementing force in bringing stakeholders together for the cause of child health in India.