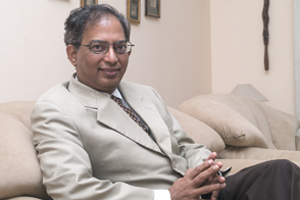 Mr. Suryanarayan is the Chairman and co-founder of Sea6 Energy Pvt. Ltd. He was formerly the President of Research and Development at Biocon Limited, Bangalore India and the Chief Scientific Advisor to the company. He was associated with Biocon for over 25 years. He served as the Chief Executive Officer for the Translational Health Sciences Institute at the National Capital Region Biosciences Cluster, Government of India from 2009-2010. His other appointments include an Honorary Adjunct Professorship at the Department of Biotechnology at the Indian Institute of Technology, Madras. He is also a member of the Executive Council of the Association of Biotechnology Led Enterprises of India (ABLE), headquartered at Bangalore. In 2009, he received the “Distinguished Alumnus Award” of the Indian Institute of Technology, Madras.