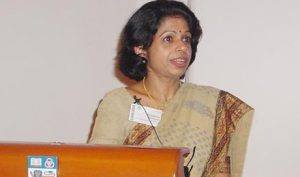 Dr. Vijayalakshmi Ravindranath earned her B.Sc. and M.Sc. degrees from Andhra University and PhD (Biochemistry) in 1981 from Mysore University while working at the Central Food Technology Research Institute (CFTRI). She was a Postdoctoral Fellow at the National Cancer Institute, USA (1982-85) and joined the National Institute of Mental Health and Neurosciences (NIMHANS) at Bangalore upon returning to India. She continued working in various capacities at NIMHANS till 2000 when she took over as the Founder Director of National Brain Research Center (NBRC), an autonomous institute of the Department of Biotechnology. She continued as Director till April 2009, when she returned to Bangalore as Professor and Chair of the newly created Center for Neuroscience at IISc.