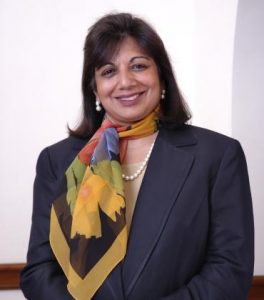 Ms. Kiran Mazumdar-Shaw is an Indian entrepreneur. She is the Chairman & Managing Director of Biocon Limited, a biotechnology company based in Bangalore, India and the current Chairperson of IIM-Bangalore. A successful technocrat of global standing, Ms. Shaw heads India’s leading Biotechnology enterprise, Biocon. She is highly respected in the corporate world and has been named among TIME magazine’s 100 most influential people in the world. Recently, Economic Times placed her at India Inc’s Top 10 most powerful women CEOs for the year 2012. Her pioneering efforts in biotechnology have drawn global recognition both for Indian Industry and Biocon. The U.S. based Chemical Heritage Foundation has conferred Ms. Shaw with the 2014 Othmer Gold Medal for her multifaceted contributions to chemical and scientific heritage.

Ms. Shaw is a part of the U.S. Pharmacopeial Convention (USP) Board of Trustees and is also a Member of the USP Biologics Advisory Group. She has served on the Board of Science Foundation, Ireland. Kiran is the founder member of Karnataka’s Vision Group on Biotechnology and currently chairs this forum. She also serves on the National Advisory Council of the Government’s Department of Biotechnology, where she has been instrumental in bringing government, industry and academia together, to charter a clear and progressive growth path for Biotechnology in India. Ms. Shaw serves as Member, Governing Body and General Body of the Indian Pharmacopoeia Commission, an Autonomous Body of the Government of India. Ms. Shaw is also on the honorary board of advisors of The National Society of High School Scholars (NSHSS), USA.

She is a part of the Prime Minister’s Council on Trade & Industry in India and the US-India CEO Forum. She is also a member of the Governing Council of National Foundation for Corporate Governance, Ministry of Corporate Affairs, Government of India and a member of the Union Commerce Ministry-instituted committee to advise the government on India’s export promotion strategy. Additionally, she is a member of the Eminent Persons Group of the Competition Commission of India, and a co-opted member on the new Board of governors of Indian Council for Research on International Economic Relations (ICRIER).

She is a founder member of the Society for the formation of “Institute for Stem Cell Biology and Regenerative Medicine”. Ms. Shaw has been nominated as Member of the Board of Trade, Directorate General of Foreign Trade, Ministry of Commerce & Industry. Moreover, she is serving on the Global Advisory Committee for its “Women and the Green Economy Campaign” (WAGE) ™ initiative that engages with women in business, government and NGO leaders to help create and develop a global green economy. Ms. Shaw is the recipient of several prestigious awards including the Nikkei Asia Prize, 2009 for Regional Growth, Express Pharmaceutical Leadership Summit Award 2009 for Dynamic Entrepreneur, the Economic Times ‘Businesswoman of the Year’, the ‘Veuve Clicquot Initiative For Economic Development For Asia, Ernst & Young’s Entrepreneur of the Year Award for Life Sciences & Healthcare, ‘Technology Pioneer’ recognition by World Economic Forum and The Indian Chamber of Commerce Lifetime Achievement Award. Ms. Shaw is also an Independent Member of the Board of Infosys, a global leader in consulting, technology and outsourcing solutions.

Her most cherished awards are the national awards, Padmashri (1989) and Padma Bhushan (2005) presented to her by the President of India, for her pioneering efforts in Industrial Biotechnology.

Under her stewardship, Biocon has evolved from its inception in 1978 as an industrial enzymes company to a fully integrated biopharmaceutical enterprise encompassing a well-balanced business portfolio of products and services with a research focus on Diabetes, Oncology and Auto-immune disease. Biocon also has a subsidiary, Syngene, which was established in 1994 to provide research services and contract manufacturing to the big pharma industry. Biocon has also built a remarkable Research Services business through Syngene and Clinigene, that offers integrated discovery and development solutions for both small and large molecules.

Ms. Shaw’s commitment to affordable healthcare extends beyond business. She is passionately focused on innovation led healthcare solutions for sustainable and affordable healthcare for the marginalized communities. Her philanthropic initiatives include an innovative micro-health insurance program based on delivering cashless healthcare through primary healthcare clinics in rural areas of Karnataka, an education initiative based on math education for school children in government schools as well making quality cancer care affordable to a larger patient population. She has established the 1,400-bed Mazumdar-Shaw Cancer Center (MSCC) in Bangalore in partnership with renowned heart surgeon Dr. Devi Shetty to deliver affordable world-class cancer care services to patients irrespective of socio-economic status and class.

She is also the Honorary Consul of Ireland in Bangalore.

She is married to John Shaw, a Scotsman and Indophile, who headed a leading textiles MNC, Madura Coats from 1991-1998 as Chairman and Managing Director. John Shaw is currently the Vice-Chairman of Biocon Limited.